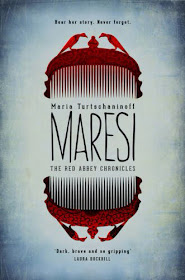 Parents looking for reading recommendations for younger children must not be confused. This is another book emphatically for young adults (plus). Its initially quiet style about the ritualistic life of a cloistered all-female community plunges later into physical and sexual violence which is no less horrendous for avoiding the excessively graphic. It is a shocking and disturbing novel, but also, for appropriate readers, a deeply moving and altogether wonderful one.

Appropriate readers. Yes. There lies the rub, to borrow a phrase. For a while I (mere man that I am) side stepped reading it, despite rave reviews, thinking it was just (aghast) a 'teen girl' novel - and labelled a feminist one to boot. I was badly wrong. It is, I suppose, what I thought it, but it is so much more too - and a hugely important book for so much wider an audience. It is also a truly great read.

To start with it is, as YA fantasy goes, refreshingly original and, well, fresh. Of course all-female communities in cloistered settings have been done before. However this 'abbey' is very vividly and evocatively imagined as is the life of young protagonist, Matesi, within it. And there are no vampires, fallen angels or grotesque monsters. That is not to say there are no monsters at all; in this context the monsters are men. And I do not mean individual members of humankind, just all the males. It has to be said that as both narrative and thematic device this is made to work very powerfully.

Of course the polarisation of the genders here into female/good, male/evil is (I hope) an oversimplification in terms of actual society. The almost complete vilification of men (the single male character who gets any degree of sympathetic portrayal, a gay boy, is good to have included) is at least a partial exaggeration. Yet this is fantasy, and it is one of the most dominant characteristics of the genre starkly to contrast the forces of good and evil, of light and darkness. So the convention has to be accepted here. In any case, I think that men as a whole have acted badly enough in many periods of our history, and indeed plenty of contemporary ones, to justify being cast in the role of uber monster.

Even more importantly, though, I think this great book is, at heart, more than simply an expression of feminism; it is a rich and deep exploration of the 'feminine principle'. Much of its considerable power comes from the fact that it draws on some of the oldest and most potent symbols of humankind. The belief system of its principle characters is built around the ancient concept of the 'threefold goddess' - maiden, mother and crone. Even though we mostly no longer accept such entities as actual deities, they remain powerful archetypes of fundamental aspects of our life and humanity. Equally the author reinvents most vividly many other profound and ancient symbols and rituals, the 'magic' labyrinth, the power of the moon, sexual sacrifice, the door to death. The whole narrative is redolent with the resonances of older stories and beliefs. Yet all are woven into the most skilfully constructed narrative, completely engrossing and hugely complex in its very simplicity. Through this, it bring to us anew the potency, and relevance, of its symbolism.

Strangely I felt a little of Tiffany Aching in Maresi, if only in that both grow through their costly spiritual/magical education yet ultimately elect to use what they have gained in the service of others. There are also just faint echoes of Tenar in the labyrinth of the Atuan tombs, although that older (and equally wonderful) novel is coming from a rather different place. Both are worthy and noble comparators. However Maresi is totally herself, as well as a very real part of all girls, and, hopefully, of all of us. She is one of the great creations of contemporary YA literature.

I trust it is fair to say that not all males in our world are represented by those portrayed here, although I am well aware that the issues of gender worth are far from completely resolved in any society, and in some even less so. Nevertheless this novel is a rich and important exploration of the feminine essence that is a vital element of our whole world, and of each one of us - male as well as female. It is also a timely reminder of the horrendously negative side of some of the more ignorant, aggressive, domineering and frankly brutish characteristics associated with 'manning up'. I hope that many boys will read it as well as girls. I think it will surprise them, as it did me, with its power and potency

Considerable thanks are due to Pushkin Press for bringing this fine Finnish novel to an English-speaking audience. Much credit is also due for what appears (to a non-Finnish speaker and least) to be an outstanding translation. What I can be certain of is that, in this edition, the world of the Red Abbey is tellingly conjured in simple, elegant, lucid and totally idiomatic English prose. It beautifully captures the voice of Maresi as she records of her own story

The whole is a triumph and, I feel, a most important book. I am including it in my short list of works which I consider the very finest examples of contemporary children's writing, rivalling the 'modern classics' from the twentieth century.

Heads up US. Due to be published your side of the pond Jan '17, I believe.