The Velvet Fox by Catherine Fisher 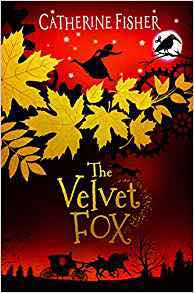 Cover: Anne Glenn
Faery interlude
I am actually in the middle of reading Philip Pullman’s The Secret Commonwealth, (along with half the reading world, of course), but I had to travel to London by train yesterday, and the thought of carrying that particular tome around with me was daunting, however eager I was to read on. So I took this instead and read the whole thing over the two legs of the journey. A most diverting and enjoyable interlude it was too.
Having interjected one story into my reading of the other, it did not take long to realise a commonality. Although far more complex, Philip Pullman’s concept of the ‘Secret Commonwealth’ is, on at least one level, much the same as the dominant presence in Catherine Fisher’s Welsh-myth-based tale: the ‘Fair Family’ or Tylwyth Teg, that world of faery folk that exists beneath the surface of our own reality, and can sometimes be glimpsed at the periphery of our vision, if we are sufficiently attuned to it.
Old fashioned - in a good way
When I read The Clockwork Crow at about this time last year (see my review from then) I warmly welcomed this fine writer back to MG fiction after many years of her writing outstanding, if sometimes decidedly scary, YA fantasy. I have long been a huge fan, and think her early Garneresque works, like Fintan’s Tower and The Conjuror’s Game still well worth seeking out as well as later ones for older readers, like Incarceron and the Chronoptika series.
The Velvet Fox is a truly splendid sequel to her triumph of last year. If I call it a piece of old-fashioned children’s fiction, then I mean this in the most positive of senses. It eschews some of the more fashionable trends and styles of many current children’s fiction offerings, but rather tells a splendidly engrossing, not to say spine-tingling, story through simple yet effective language. It is never less than accessible, but always imaginative, sensitive and thoroughly engaging. It could, in a sense, have been written at any time in the last forty or fifty years, and is none the worse for seating itself firmly in what might be considered the golden age of children’s literature.  Sometimes it reminded me a little of the likes of Joan Aiken and I even caught vague echoes in places of Frances Hodgson Burnett. There are times, of course, when we want contemporary and ‘relevant’, but there are also times when what is needed is simply a good story, beautifully told. And that The Velvet Fox certainly is.
More faery than fairy
But if all this sounds like it is simply a cosy read, then think again. Catherine Fisher’s fantasy worlds can be very dark, and although, here, she has rightly and successfully moderated this for her younger audience, her Tylwith Teg are still a very long way from Cicely Mary Baker’s Flower Fairies. Definitely not the sort of creatures you would wish to meet on a dark night, or, in this case, an Autumn afternoon.  Sinister figures escape a disquieting toy carousel, a tormenting drummer, a  dangerously beguiling dancer, a vicious juggler - and there is worse to come, far worse. No plush toy fox will every feel quite the same again.
In fact, for me, the highlights of this book are a series of chilling dreamlike evocations of the evil faery world into which hero Seren and her cantankerous clockwork companion are drawn to save her friend Tomos. As I might expect from this author both characters and settings are evocatively drawn, with just enough feeling of Welshness and snippets of its wonderful language to feel authentically steeped  in Celtic magic. Of course the good characters are brave, kind and loyal and the evil ones scarily malevolent, and that is exactly as it should be in this type of book.
This is one for young readers everywhere to curl up with, and temporarily escape the realities of everyday humdrum into imaginatively conceived and skilfully crafted fantasy.
Posted by Gordon Askew at 02:12