The Boneshaker, The Broken Lands by Kate Milford 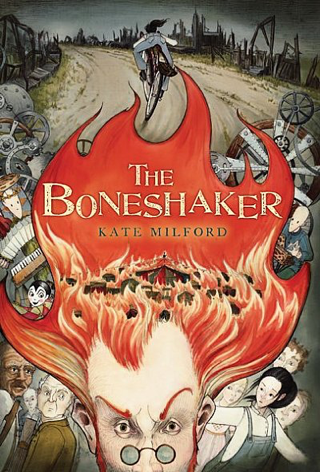 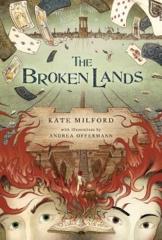 These two children's/YA novels by US author Kate Milford are not completely new, having been published in 2010 and 2012. They are however a new find for me - and a very special one. They seem to have earned deservedly accolades in The States, and the two together are more than enough to prompt me to add this author to my list of the finest contemporary writers for children.
They are most evocatively set in place and time, the first in  small town America of 1913, the slightly later-written prequel in the emerging New York City, specifically Brooklyn and Cony Island, at the time of the building of the Brooklyn bridge around 1877. Each setting delighted me as well as enlightened me rewardingly about these particular periods of America's development. But they are far more than historical fiction: each is also an intriguing mystery, a very engaging human story, a thrilling fantasy, and has more than a touch of grand gignol to spice the excitement too.
It is truly refreshing to come across such original, diabolical and yet folksy fantasy, rather that the apprentice wizard fare that has become so standard in recent years. These books deal with important 'issues' too, but sensitively and subtly, rather than  beating the reader over the head with them. They have wonderful characters, the young teenage protagonists totally beliveable  and engaging, the older characters just that, be they warmly drawn and loveable, eccentric and intriguing or spookily disturbing. The first book is gingered by such wonderful ingredients as automatons, a weird and wonderful travelling medicine show, and the seemingly untameable rogue boneshaker of the title. The second by magical fireworks, a demonic plot and a sensitively and touchingly developed young love story. In each case too the whole is most skilfully written to create rich atmosphere and hold the reader enthralled.
Both books are a delight and for me a real discovery. I shall now most certainly seek out Kate Milford's more recent titles and I most warmly recommend her to you.
As is too often the case, these books are sadly not published here in the UK, although they can be sourced online. As you know I like to support independent 'real' bookshops whenever possible, but sometimes . . .
Children need and deserve access to the best writing of the English-speaking world, and although many fine books are published in the UK there are numerous treasures out there which aren't. Kate Milford's books are remarkably fine examples. Five stars to her for striking originality and captivating storytelling.
Posted by Gordon Askew at 08:55