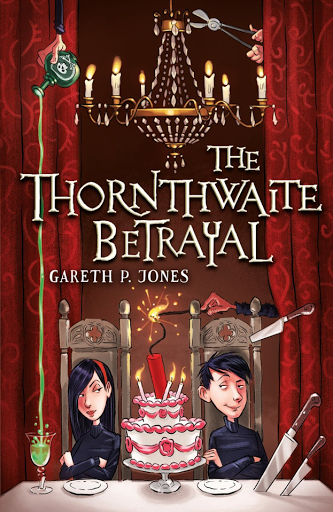 Alongside many populist series books for younger children, Gareth P Jones has built up a now substantial oeuvre of fiction for middle years and early teen readers which establish him amongst the best of contemporary writers  for these age groups. Although rarely magic fantasy as such, his books exude quirkily delightful imagination and a huge sense of fun. He hit new heights recently with two remarkable - although very different - novels whose  originality, richness and ingenuity puts him up there with the greats, No True Echo and Death or Ice Cream? (See my reviews posted here in February of this year.)
However, since the development of his fiction has been so strong over recent years, I was initially just a little concerned to discover that for his most recent title he has gone back to write a sequel to an earlier novel from 2009, The Thornthwaite Inheritance. This was, and indeed still is, a very entertaining book, and, deservedly, a hugely popular one. However its core concept and tone does belong clearly to  the comic-gothic sub-genre already established by Lemony Snicket and the like. At the heart of its story are the continued attempts to kill each other of two twins who are the joint inheritors of an ancient mansion. The violence is, of course, closer to Looney Tunes than to Chainsaw Massacre and has a great deal of appeal for its intended audience. But by the end of this book the conflict between the two protagonists is essentially resolved, engendering doubts as to whether a sequel might have strong enough places to go, or whether it might just be an an over-contrived re-run.
With a writer of the considerable ability of Gareth Jones I need not have worried. The Thornthwaite Betrayal is a fine book, unlike many sequels, actually even better than its precursor, and engagingly successful on a number of levels.
What the author has penned here is essentially a mystery, and one that works in all the best ways, drawing the reader in with innumerable questions and holding rapt attention through a succession of intriguing developments. The compulsion of the Thornthwaite twins to try to kill each other has now been replaced with apparent attempts by person or persons unknown to kill them both. This may not sound particularly inventive as a plot idea in itself, but its execution here is very clever indeed. Through a sequence of very short chapters Gareth Jones introduces numerous eccentric and fascinating characters and scenarios. These sections, often told from different character perspectives, really do act like jigsaw pieces, gradually building a picture, illuminating back-stories, adding evidence, and also raising questions as to what may pertinent, what a red herring, or what entirely irrelevant. Another of this author's particular talents on display here is his skill in writing dialogue which illuminates events, and particularly character, through what it said, the way it is said, and of course what is not said. Much of the gradual piecing together of this mystery is absurd,  some is touchingly enlightening, everything is enthralling and the whole hugely entertaining.
And that leads on to the second level on which this book is so successful. It is often very funny indeed. Its humour ranges from the slapstick to the surreal and also includes a great deal of wit. It is pure delight to read from beginning to end.
Yet the book has surprising depths too. Without bludgeoning the reader over the head with 'issues', the story explores life's delicate balance between truth and lies very tellingly, and perhaps even more so that between suspicion and trust. Gareth Jones is also quite delightfully clever, in the way he sneaks an impassioned plea for libraries into the mouth of one of his characters; he certainly earns another gold star from me for that. In the same way he also threads in  some really pertinent advice for young writers, which I'm sure will be valuable to teachers as well as to children, in schools and out of them.
On perhaps the most important level of all, though, this is a book about two children if not quite fully 'coming of age' then at least growing a little more into their own skins. For underneath their superficially cartoonish demeanours , twins Laurelli and Ovid, are drawn with many genuine qualities and concerns. They are warm, rounded characters with whom the readers will readily identify. Laurelli's initially abortive desire to become a writer of stories, together with Ovid's almost Adrian-Mole-like fumbling with the idea of a first girlfriend, make them endearingly human. Underneath the mutual mistrust that persists from their earlier behaviours, the author cleverly conveys a real affection between them and their journey of discovering who they can trust is a most warming one - especially when they discover that it is principally each other. Ultimately they learn to trust that who they are is of much more worth and importance than they once thought.
When aspiring writer Lorelli shares potential plots with the librarian, she responds,  'Your ideas are rich, vivid and exciting'. This equally applies to the writing of Gareth Jones himself.
Ultimately this new novel  does not have quite the originality of concept, depth of thought or bold playfulness of structure of its two most recent predecessors. But this is a different work for a different (younger) audience. The Thornthwaite Betrayal is a fine children's book in its own right, as skilful as it is delightful. I am sure it will be hugely enjoyed by its young readers and prove highly successful. Not far under its surface bubbles the talent of the quirkily brilliant writer who penned No True Echo and Death or Ice Cream? I trust it will erupt again very soon.
Posted by Gordon Askew at 07:46

The Beginning Woods by Malcolm McNeill 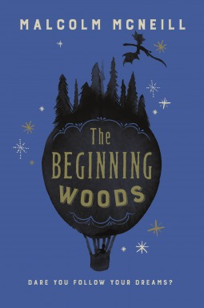 I read so many children's fantasies that recycyle the same old elements and themes. A few give them wonderful fresh vitality, but most are drearily predictable. I have therefore come to value originality hugely - provided, of course, that it is coupled with high quality writing. It is with absolute delight then that I have discovered The Beginning Woods, because it scores five stars (plus) on both these fronts.
I suppose at heart its story is 'classic': an (apparently) orphaned boy goes off into a fantasy world in search of his 'forever parents'. Additionally he is tasked with saving his own world from devastating 'vanishings' by discovering their cause and thwarting a malevolent mastermind. As with many such tales he comes to realise that these two quests may be related, or even the same. Yet Malcolm McNeill's is just about as far from a conventional telling as it is possible to be. His tale is crammed full of the most fantastical and original imaginings, and his narrative idiosyncratic to say the least. It is an odd book, in the most weirdly wonderful way. It is wild and uninhibited in its invention and virtually defies classification. It is at times steampunk, at others fairy tale; it veers from gothic horror to laugh-out-loud comedy. Is is philosophical and discursive, in the most entertaining of ways; it raises profound issues and yet is a rollickingly exciting read. It is terrifying and endearingly touching. The relationship between Max, its ambivalent and complex protagonist, at once both empathetic and disquieting, and the (almost) ghost girl who moves in under his fingernail and engages him in frequent internal discussion, is one of the most entertaining (and moving) in recent children's fiction.
So rich and varied is the invention that for much of the story, especially the first two thirds, it has an almost Alice in Wonderland feel of moving from one unexpected scenario to another, without much clear connection. However each new encounter is more than intriguing enough to keep the pages turning. Yet unlike that earlier classic, this is not whimsy justified as dream. All the strange and apparently disparate elements do eventually weave together in a way that excites and delights.  The final third of the book is a rollercoaster of both action and revelation, leading to a thrilling denouement.
Essentially this story centres on one of literature's most profound and important themes, itself. That is, on the relationship of story to reality; dreams to empiricism. In this, it treats not only profoundly and touchingly of death, but, as a consequence, on what it means to be alive. Its ending then, cannot be anything but ambiguous and questioning. Much is resolved and much is happy, but at inevitable cost and loss. The closing sentences, though, leave room for endearing warmth and hope too. Through all this, the writing is quite superb, sometimes edging towards the post-modern by boldly and delightfully using both wordplay and typography to greatly enhance and enliven the narrative.
This book is one of the very finest recent additions to the children's fiction canon. It fully dererves to join the classics and the ranks  of those lauded  through awards and it will surely do both. It is a great find for publishers Pushkin, to whom we seem to have a good deal to be grateful for these days. An enormous thank you to them - but most of all to Malcolm McNeill.
Posted by Gordon Askew at 05:40