Half Bad and Half Wild by Sally Green 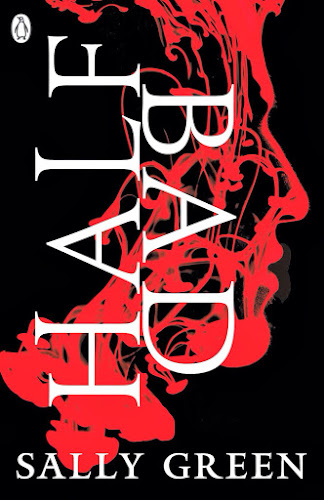 This book really does not need my recommendation, showered as it has been with accolades and award nominations. It has sold and continues to sell extraordinarily well in numerous countries in English and in translation. It is a phenomenon and deserves to be so.
However since I have tasked myself to record in thIs blog the gems discovered in my personal reading quest, there is no way in which I could miss setting down my own responses to Half Bad and its sequel. For this is a gem of gems, a rare black diamond, it's multi-faceted brilliance suffused with dark inclusions (rather, indeed, like the eyes of its protagonist). And yet this particular book has lingered long on my reading pile. I think I feared that, despite its high regard, it was going to be basically a teen girls' gothic fantasy/romance and not really my thing at all. How wrong can you be? Having finally read it I can of course fully appreciate why it has a strong appeal to a 'new goth' generation. However it is far more than merely a girly vicarious thrill; it is a unique, substantial and very special piece of writing. If I label it literary I mean to imply high aesthetic and linguistic quality rather than any pretentious heaviness.
However, just in case parents are looking here for recommendations, I do feel obliged to include a warning. Half Bad and its sequel are most certainly Young Adult and not children's books. This is not so much because of their level of their writing; whilst they are highly sophisticated in both concept and construct, they remain highly accessible works. However their magic is very dark indeed, they are gruesomely violent and their depictions of physical and mental abuse, often nothing short of torture, are viscerally graphic. Yet anyone of appropriate maturity missing Half Bad through squeamishness or aversion to its horrific aspects will miss what is undoubtedly a very great read and also, at heart, a very sensitive and humane novel.
Reading this book has led me to reflect on just what makes a great fantasy novel. Certainly originality is important to me; I hate reading the same-old-same-old. But of course it has to be both completely engaging and amazingly well written too. Original rubbish is of no more value than the regurgitation of earlier quality. And then again complete originality is very rare indeed. I am usually more than happy to settle for old formula given a completely new slant, or traditional elements combined in a startling new way. It is into this last category that Half Bad falls and, within this, startlingly original is certainly what it is.
Here we have a remarkable fusion of formerly disparate elements. On one level is it the autobiographical journey towards self-discovery of a very uniquely-thinking youth (almost reminiscent in style of Christopher Boone, or Adrian Mole without the comedy, or an older Standish Treadwell or even, yes, a younger Leopold Bloom). Mixed with this, however, is a context of witches coexisting alongside but somewhat separate from our own contemporary world, vaguely as per Harry Potter, but far darker and more gown up. And at the heart of this strange mix is an rich, deep exploration of the fantasy opposition of 'good' and 'bad'. Here the two forces are represented, superficially at least, by 'white' and 'black' witches, although it rapidly becomes obvious that this is far too simplistic a classification. Both groups are morally ambiguous to say the least, and vicious power seeking is prevalent amongst both 'sides'. All of this is brought brilliantly together in the charismatic but complex young protagonist Nathan Byrn, a white/black half cast who is fully accepted by neither faction.
Furthermore this amazingly conceived and constructed scenario is developed through the most brilliant, and again startlingly original, writing. The narrative perspective slips ambiguously between clear tenses, and even more strangely between first and self-referenced second person cases However it centres around what is best described as a stream of consciousness articulated in the 'historic' present. Readers of this blog will know that I am generally not impressed at all by present tense narratives, but here it works brilliantly, taking you right inside Nathan's mind and holding you there with an inescapable grip. Sally Green's use of language itself is often staggering too, in both vocabulary and structure, making for a very special reading experience. It is hard to pin down, but, in this first book particularly, it is indisputably original and brilliant. So often you end up counting with Nathan, breathing with him, seeing with him, suffering and dreaming with him. It is quite simply one of the most gripping reading experience I can recall; hideously gut-wrenching, heart-rendingly tender, totally mesmerising. I can only suggest you read it for yourself. 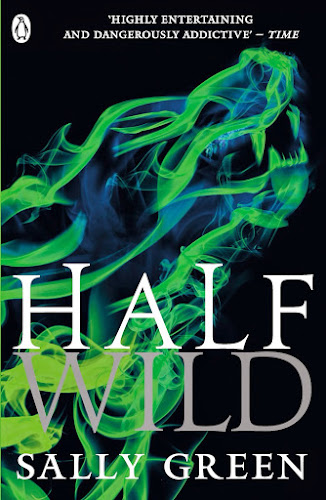 Very rarely indeed do I read through even direct sequels back-to-back. I like to give myself an imaginative break and later return as if renewing an old acquaintance. It is therefore a testament to the compulsive power of Sally Green's story that, after finishing Half Bad I continued straight on into this second volume of Nathan's story without the least hesitation. You could not have persuaded me to do otherwise.
If I say, then, that in the event Half Wild was a very slight let down, you must take this in the context of my considering the first volume superb. Half Wild is no mean read. It has many outstanding features of its own, and continues the tale engrossingly. It is just that the narrative here is somewhat more meandering and does not quite sustain the intense focus of the first book. Actually this is not altogether untypical of the middle book of a trilogy. In all honesty I would have said exactly the same about The Subtle Knife, outstanding book that it is. In the end this did not in any way prevent His Dark Materials as whole from being one of the finest children's fantasy trilogies of all time. I am optimistic that the same will apply to the whole 'Half ' work (if you will pardon the expression) once that too is completed.
It is partly that the nature of the story changes somewhat in this second volume. In and amongst his own discovery of his darker, 'wild' self, the focus shifts to place Nathan's own situation into a context of wider conflict. Here the work's strangely tensed prose becomes slightly less comfortable, as Nathan's voice makes frequent shifts from self commentary into something closer to a conventional narration of events. However characters and relationships continue to be developed with both strength and subtlety- not least the wonderful one between Nathan and his friend Gabriel - and there are still many passages of quite superlative writing.
In this second book Nathan is increasingly drawn into a scenario where concerned white, black and half-breed witches across Europe are forming a 'military' alliance against the junta of white witches who seek to obliterate all blacks. This is serious and important stuff and, despite its fantasy context, something much closer to WWII resistance fighting against the Nazis than to the Order of the Pheonix. However, whilst The Alliance purports noble intentions to restore a world where different witches can live in a state of mutual tolerance, white and black, good and evil remain confused, ambiguous and ambivalent. This is not a picture of pacifism. It is a scenario often based around revenge for the slaughter of loved ones where violent killing seems to be seen as the only alternative to being violently killed.
And it is in this my major concern about this undeniably exciting second book lies. I found myself frequently worrying that the vicious slaughter of one 'human' being by another is in fact being glamorised. Careful reflection ultimately allowed me to convince myself that this is not so. This is horrendous war in the sense that it has been known throughout human history and it is being presented as confused, misguided reality, albeit through the filter of fantasy. Whether such behaviour is ever justified is, as yet, left more open. The saving factor is Nathan's retained revulsion to killing, even when he discovers the killer in himself.
To the question of whether this book romanticises violent killing, my answer is a reserved no. But it comes close. Set against the context of current extremist slaughter in our own world, it comes disturbingly close.
The climax of volume two is grusomely and affectingly powerful and once again left me desperate to read on. In the end I did find myself back inside Nathan's head, although horrified and devastated to be there. However, this time reading on immediately wasn't possible. The final part of the trilogy, Half Lost, is not due until March 2016. The jury must therefore remain out on the work as a whole. It has an undoubted potential for greatness, but there is a way to go. If Sally Green can use the final instalment to pull Nathan's tale tightly and cohesively together; if she can rediscover something of the focus and power of Half Bad and take us fully back inside Natan's minute to minute thinking rather than using him to narrate events; if she can resolve the work's moral issues satisfactorily without over-simplifying or sentimentalising, then the whole could well turn out to be a masterwork of genius. Her writing skill and imaginative power are so special that I have much confidence that this will indeed come to be.

Posted with Blogsy
Posted by Gordon Askew at 06:43