The Box and the Dragonfly by Ted Sanders 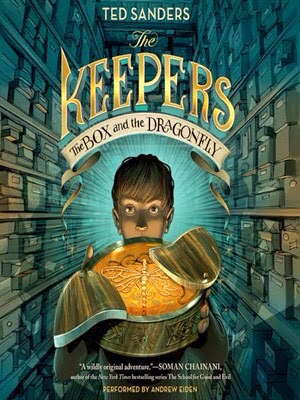 My last review was of The Mark of the Dragonfly. Now here is The Box and the Dragonfly. It would seem to be dragonfly season.
This is another wonderful book. It is the first volume of a intended sequence, The Keepers. Final judgments need to be reserved until we see if the whole lives up to the enormous promise of this opener, but the potential for greatness is most certainly here. Regardless, this is a very fine book in its own right. I am delighted that UK publisher Hot Key have picked up the children's debut of this hugely talented US writer and brought it straight over here.

This is a true children's book. It is not one of the more complex, multi-layered or sophisticated novelsI have included here recently. It is not resonant with the tropes of myth and archetype. Nor does it particularly explore the depths of our human condition as do such gems as Doll Bones and Ophelia and the Marvellous Boy. It is very much a fantasy adventure story. But it is none the worse for that and has many delights, and indeed depths, of its own.
The core of its story is built around some of the key conventions of children's fantasy literature. Its central characters of a boy and girl are drawn into a world which they discover beneath the surface our own reality, but of which most people around them are unaware. There they are selected for their qualities to play significant roles in a mission to defeat great evil. Horace and Chloe, the young protagonists, are brought under the influence of a couple of older mentor figures, the 'Wardens', and each of the children is chosen to become the 'keeper' of a very special 'instrument'. These endow them with particular abilities but place them in direct conflict with malevolent forces who predictably want to take over these instruments to augment their own power. All this is very familiar territory to children's fantasy readers.
Here, however, conventionality ends and much fresh vivid imagination is brought to bear by this exciting author. Being a 'keeper' quickly involves each child in the formation of a deep psychological/emotional bond with their instrument. Further, as one of the characters explains, the powers which accompany each instrument - seeing into the future for Horace, passing through solid objects for Chloe, floating into the air for another child - are not so much 'magic' as extensions of science. They extend what we know and understand to be true just beyond what we know and understand to be possible. They transpose some of the recently discovered principles of post-Einsteinian, quantum physics back onto everyday experience, exploiting anomalies in space and time.
Yet The Keepers is not quite Science Fiction either. The gradual and subtle introduction of romantic, invented nomenclature - 'Fel'Daera ' for the box through which Horace sees the future, 'Alvalaithen' for Chloe's dragonfly instrument, 'Kesh'kiri' for the hidden race - keeps everything within the compass of fantasy. It is a fascinating and intriguing amalgam and one that I have not encountered before in quite this form.

The Box and the Dragonfly is, then a thinking book, a book for the thinking reader. Concepts are explored thoughtfully, logically, or at least ultra-logically. The implications of Horace's ability to see the future for the way he acts and the paths he chooses are worked through both by the author and ultimately by Horace himself. This is in stark contrast to the rather facile and logic-defeating time travelling that is to be found in many children's books. Here is a book which allows space for the exploration and explanation of ideas and for reflection upon them, both by the characters and by the reader. Despite some dramatic and exciting incidents, much of the first two thirds of this fairly long novel has, in consequence, an overall pace which some might consider slow. It is a book for committed readers rather that those just seeking an introduction to extended reading. However I hope that even these latter may eventually find their way to this remarkable work, for its pace, it's reflection are integral to its ultimately engrossing power. Making sense of what is happening, and then exploiting that understanding, is very much what the story is about.
Another huge plus of this book's length and pace is the opportunity it gives its author to truly develop characters and relationships. This too he does to great effect. Both the questioning Horace and the often chippy, but wonderfully brave and loyal, Chloe are rich creations with whom the readers are given ample opportunity to become involved. Their relationships, with each other and with other key characters evolve and change in engrossing style . It is a considerable authorial coup, for example, that he can devote a whole chapter to Horace playing chess with his mother, which apparently forwards the action of the story very little, yet deepens its humanity very considerably. It is clever and important too that, within a superficial framework of good v evil, much about many of the characters remains ambivolent and uncertain. Neither Horace nor Chloe are ever truly certain whether they trust or even approve of the motives of their two mentor 'Wardens'.
Yet for all the slower pace and thoughtfulness of so much of the book, the final 150 or so pages avalanche into a most wonderfully gripping narrative climax. Suddenly, to see the future through Horace's eyes, through his wonderous box, and yet still to want desperately to know if it will actually happen, is an exquisite excitement. This combines with an empathetic sharing of the emotional trauma when both Horace and Chloe are torn from their bonded instruments, their 'tan'ji'. This is an experience not unlike the severing of a character from their daemon in Philip Pullman's Northern Lights and creates devastating tension. What we experience towards the close of this book is a clever drawing together of the elements of the author's detailed build-up into one of the most exciting and gripping climaxes to any novel I have read in a good while. It is a stunning piece of invention and a thrilling piece of writing.
There is one further feature of this book that cries out for accolades - and that is the sheer quality and skill of its language constructions. I have heard pianists talk about the way that in some great compositions the notes just seem to fall comfortably under the fingers. In this book the words, phrases, sentences fall equally comfortably under the eye - or perhaps more accurately onto the inner ear of the reader. This writing is sometimes beautiful, as for example is the description of what Horace first sees through his box. It is often dramatic. It is sometimes deeply affecting, as when Horace and Chloe are severed from their instruments. But it is always pleasing, always apt, always effectively communicative. Words, phrases and sentences feel right. This requires great writerly skill, and Ted Sanders has it in spades.

By the end of the book the fact that it is the first of a new sequence becomes a cause for much rejoicing. This first volume feels in many ways almost like a prelude to a story, but those ways are all good ones. There is so much unexplored and unresolved. There are so many intriguing things yet to discover about characters to whom we have become fully committed and about their conflict with the malevolent Riven. There are other characters too about whom we as yet know so little. It is to be sincerely hoped that we are to discover stories and even back-stories to complement fascinating glimpses of the likes of Gabriel, Neptune and the flute-playing Ingrid, not to mention Beck and of course, astoundingly, Horace's . . . but no spoilers. Suffice it to say that what appears initially to be the story's wind-down coda turns out to contain one of the most profound and devastating surprises of the whole tale.

The Keepers has all the makings of a great addition to the canon of children's fantasy literature. Even as a stand-alone The Box and the Dragonfly is a cracker of a book.

Posted with Blogsy
Posted by Gordon Askew at 07:27