A Most Magical Girl by Karen Foxlee 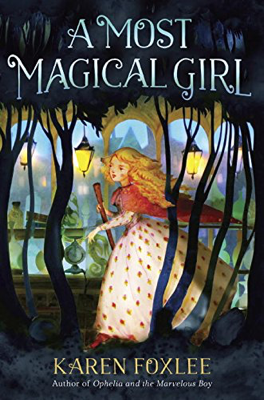 This author's previous children's book, Ophelia and the Marvellous Boy, was one of my top finds of last year, a substantially new 'fairy tale', highly original, touching and with rich depths. (See my post on this blog from March '15.)
In its basic story concept, this book, it has to be said, is not anywhere near as original. A child abandoned to the 'care' of  a pair of Dahlesque aunts, so that they, witches that they are, can teach her to develop the magical talents of which up to that point she was unaware, or at least unconscious. The revelation  that she is the subject of a prophecy and the only person who can recover a key magical object and thereby save the world from the clutches of an unspeakably evil magician,. These are key elements of a story, that in various forms and guises, has been told many times already. Annabel, the protagonist here, is a 'poor little rich girl' abandoned by her mother to a world of hardship  she scarcely recognises let alone understands. This is admittedly a slight variation on the ubiquitous hard-done-to waif taken from an grim orphanage. But even this story element has been used often enough before.
Yet A Most Magical Girl is, in fact,  a fine, remarkable and most magical book. This is because Karen Foxlee is a fine, remarkable and most magical writer.
To these 'classic' children's fantasy story elements she adds layers of rich, original and often quite poetic imagination. The aunt's bedroom characterised by its sound of an river running deep belowit; a map etched on the protagonist's skin, which, superficially at least,  disappears as she achieves objectives; a nervous and rather wayward broomstick - just a few examples of the writer's enhancing and entrancing inventions. Her story too is peopled by sensitively drawn and endearing characters with often quite complex relationships. The gradually revealed truth about Annabel's patents, her emergent feelings about them, and her developing relationship with her aunts, each add layers to the narrative. Over and through everything, her rich friendship with her two companions, the strange 'wild child' of London, and 'the only troll with a twinkle in her eyes', would themselves be enough to render this a very special story. Although very different, both are wonderful and endearing creations.  Nor is this tale without its sadnesses - another enriching feature of what might otherwise be simply an it-all-turns-out-all-right-in-the-end story. Much does turn out all right, but not quite everything and this leaves the reader reflective as well as satisfied. A good way to be at the end of a book.
However it is the excellent quality of Karen Foxlee's actual writing which makes this book most particularly remarkable. She has a most skilful way with English prose. Always mellifluous and with a combination of balance, variety and potency, it brings endless delight to the 'reading ear'. Her  powers of picture painting are considerable and both her characters and locations truly live. You can see, hear, smell and almost breathe the very air of the Victorian London in which the tale is set. Her dialogue sparkles, as well a sometimes provoking out-loud chortles. Her lead characters soon become precious friends. And not only are her word choice and sentence building  masterly, but so is her storytelling, with a range of clever narrative devices compelling the reader to turn the next page. And the next. And the next. All of this means that the narrative rattles along with a rollicking  and enchanting excitement.
In the end, Annabel does turn out to be a not-too distant cousin of Ophelia's. Whilst her defining mantra of,  'Be brave. Be good.' may be in some ways basic and simple, germane to this type of fantasy, it is none the less both touching and inspiring. There is an honest truth about her which will strike a chord in those who read her story. It will delight and enthrall many children, I'm certain, and will, I strongly suspect, also become a favourite of parents and teachers Young fans of magical fantasy, and indeed those new to the genre, should not miss it; it is a real treat. It is published now in an American edition (a beautiful volume as US hardbacks so often are), UK readers, who do not get hold of an imported copy, should not have long to wait for their own. It looks like it is due out from Picadilly Press in early September. Meanwhile, if you haven't already met her, catch up with the equally magical Ophelia.
Posted by Gordon Askew at 13:06

Fantasy gem now out in U.S 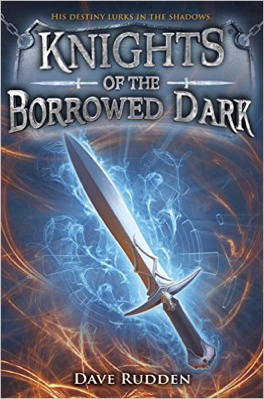 This funny, scary, brilliantly written and hugely entertaining MG fantasy is now out in the U. S. and transatlantic readers should NOT miss it. See the my full review on this blog, posted May '16.
It is also great to have a fine hardback edition of a book I feel sure is destined to become a children's fantasy classic.
Posted by Gordon Askew at 05:57