Invisible in a Bright Light by Sally Gardner 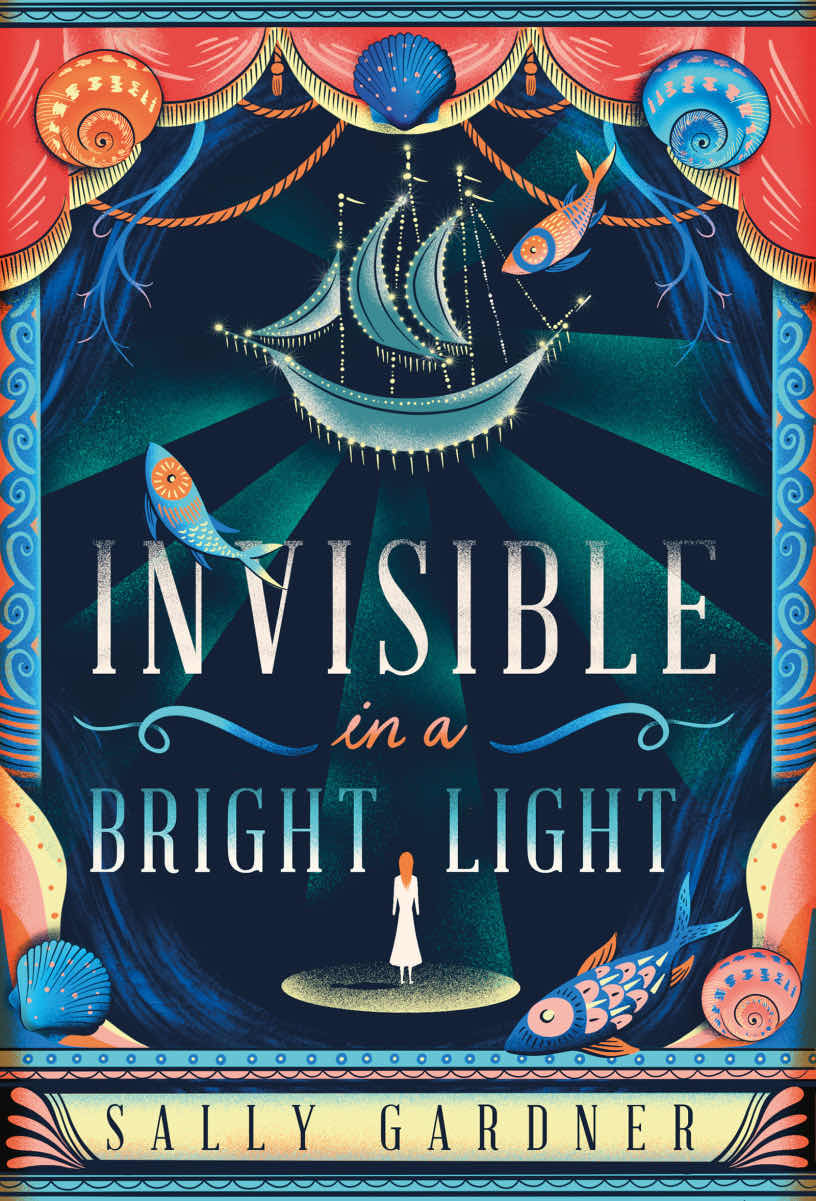 Cover: Helen Crawford-White
‘Time turns on a wave; the tide changes; the clock resets.’ (p 322)
(Un) Usually strange
This book is an intriguingly strange mixture of genres, but then it was written by Sally Gardner, who has been writing books that are an intriguingly strange mixture of genres even since her triumphant debut into children’s fiction with the wonderful I, Coriander, in 2015. Since then she has proved herself one of our most imaginative and engaging authors in a string of excellent titles. All are well worth seeking out by bookish young readers, who will be enthralled on many different levels. Often her books mix history and magic in a way that purist historians  may disapprove, but open-minded children will relish at the same time as they learn much. They are magical realism of a kind, I suppose, but very much of their own kind. I doubt few children will actually confuse their elements of fantasy with past reality. One of my absolute favourites of her books, though, Maggot Moon, is slightly different in its genre, being one of the most effective (and moving)  dystopian adventures that I know for younger readers.
Wrapped in mystery
Invisible in a Bright Light is every bit as much of an enigma as its title suggests. Insofar as it is a story about children who live in and around a nineteenth century opera house, it could be a tale from the pen of Eva Ibbotson in her more romantic vein (as opposed to her comic one), or even that of Noel Streatfeild. It has an inhibited girl who discovers a great talent, a diva mother, cruelly jealous of her own daughter’s flowering artistry, an admired little dancer, a kind-hearted boy who helps create scenery, and an avuncular, if rather enigmatic clown - all very endearing, with no lack of emotional tug. It could be such a tale, that is, if it did not exist within the framework of a horrifying  life-and-death game run by a disquieting undersea guardian of hook-suspended, seemingly-drowned corpses. It is nightmare stuff that could almost come from the likes of Stephen King.
In the juxtaposition of these two disparate elements abide many mysteries. There is a huge galleon-shaped chandelier that crashes disastrously without obvious cause; there is a ship at sea found inexplicably bereft of any human life (it is not without significance, perhaps, that two of its principle young characters are called Maria and Celeste); there are unfolding memories of a part life different from the one being lived, and objects that prompt those recollections; a miraculous ability for a young girl to radiate intense light. Woven through everything are pervading issues of both reality and identity. Is the action of the story dream or reality, present or past, life or game? Or perhaps it is just a play acted out for a toy theatre? Is Celeste really Maria, or was she in the past? Can she ever find herself, or her lost family? The intrigue of it all pulls the reader irresistibly through a truly enchanting, if sometimes chilly, narrative.
Truth in fantasy
I love children’s authors who feed the imagination of readers with their own rich imaginings, and Sally Gardner is one such. Despite her darknesses, in the end she promulgates wholesome values; she is a writer with heart. Many children, now and in the future, will find in her writing the same courage and hope that she conjures in her character, Celeste.
‘You shone so bright with the truth, with the ferociousness of love, no monster could face that and live.’  (p 326)
Posted by Gordon Askew at 08:14