The Wizards of Once: Knock Three Times by Cressida Cowell 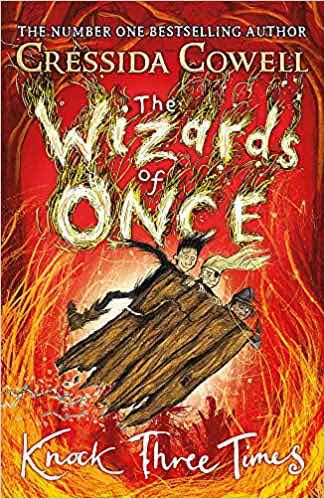 ‘Let me live my life doing Impossible Things!’ (p 129)
Open up (again)
Open sez me.
Rat.Tat.Tat.
Bang. Bang. Bang.
Thump. Thump. Thump.
Hey. No need to get agitated. Once you get hold of a copy of Knock Three Times, you’re in - in for a real reading treat.
Once was wizard, twice was pure magic, but number three is an absolute knockout. It knocks most younger children’s fantasy out of the park. When it hits the shops in September, it will knock everything off the top of the children’s bestseller charts for sure, and rarely has anything deserved to do so more. Cressida Cowell’s books are where huge popularity and real writing quality meet. I know of few contemporary children’s writers who are doing more to put the pleasure into ‘reading for pleasure’. 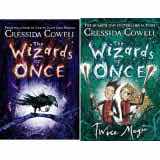 Yet this third book of her Wizards of Once series, like its predecessors, is no patronising, simplistic read, written down to its young audience. Rather it takes just about every ingredient children love and, without diminishing their enjoyment one jot, elevates them to  richly stimulating fest of language, ideas and  imagination. It is quite a feat. Underneath Cressida Cowell’s anarchic littering of untidy text and apparently scrawled drawings, which carry so much instant appeal to children, she is quite a writer - and a very skilled artist to boot.
Thee times special
For starters her use of language is very special. Unobtrusively, she seeds her writing with interesting and challenging vocabulary, and builds her apt word choices into prose that has its own most pleasing rhythm and cadence. It falls comfortably, yet excitingly on the reader’s ‘internal ear’. In fact this will be wonderful prose to read aloud. For example, the description on pages 43-45 of the witches swooping down to attack, ‘like a couple of infinitely evil peregrine falcons,’ is quite superbly evocative, thrillingly terrifying, without letting up for an instant on delicious entertainment.
Whereas many (too many?) currently popular children’s reads employ  a simple, single viewpoint, Cressida Cowell tells her tale through multiple, shifting perspectives, manipulated by her intriguingly mysterious, anonymous narrator. It makes for a rich, complex tale, that, nevertheless avoids being in any way confusing or disconcerting. Rather its shifting viewpoints only add to intrigue and excitement, driving the reader compulsively forward through a sequence of thrilling events and encounters between her vivid characters. Whilst her story plays on the classic fantasy opposition of good and evil, darkness and light, it is here threaded with interesting ambivalences too. The protagonist children are gutsy and brave, but inexperienced and vulnerable, not without their foibles, whilst opposing  ‘villains’ can show a glimpse of a human face at times.
Then and now
Like the best children’s fantasies, the narrative draws deep on tales long told and so pulls with it the resonant archetypes of dark forest, magical races, riddling with a monster and apocalyptic conflict. But the tale delves too into our lost lore of landscape, and images like those of a chalk mound with carved horse, a great hall inside a hill, opened by a magical word, and mistletoe-clad oaks, root it into the power of ancient nature magic. In fact the links reach back long and far, and shake hands with humankind’s origins.
‘The cave was decorated with drawings of animals, bears and wolves and Snowcats just like their own, and deeper in the cave still, with the bright red handprints of the ancestors . . . helping them along in their quest with a handshake from the past.’ (p 369)
There is also more than a hint of Fairy Tale romance. Yet Cressida Cowell’s story is no simple regurgitation of either older tales or current fantasies. It crackles with the electricity of originality and imagination.
‘Even for the Wizarding world, this is weird.’ (p 104)
Her themes too spring directly from her fantasy context, yet emerge as deeply relevant to the world in which her young readers are growing up. Crucial is the idea of a mechanistic, and often bellicose, society driving out the values  of imagination and ‘magic’. Feminism gets a look in, as indeed it should.  She evokes, too, a sympathy with the natural world worthy of Robert Macfarlane, not least through the amazing character of her ‘philosopher giant’, as well as continually challenging prejudice in a way that provides such a wonderful model for her young readers.
‘There are people who think that just because trees have no mouths, they cannot talk. Those people are wrong, and they are often the kind of people who think that other people have to be exactly like themselves to count as people at all.’ (p 36) 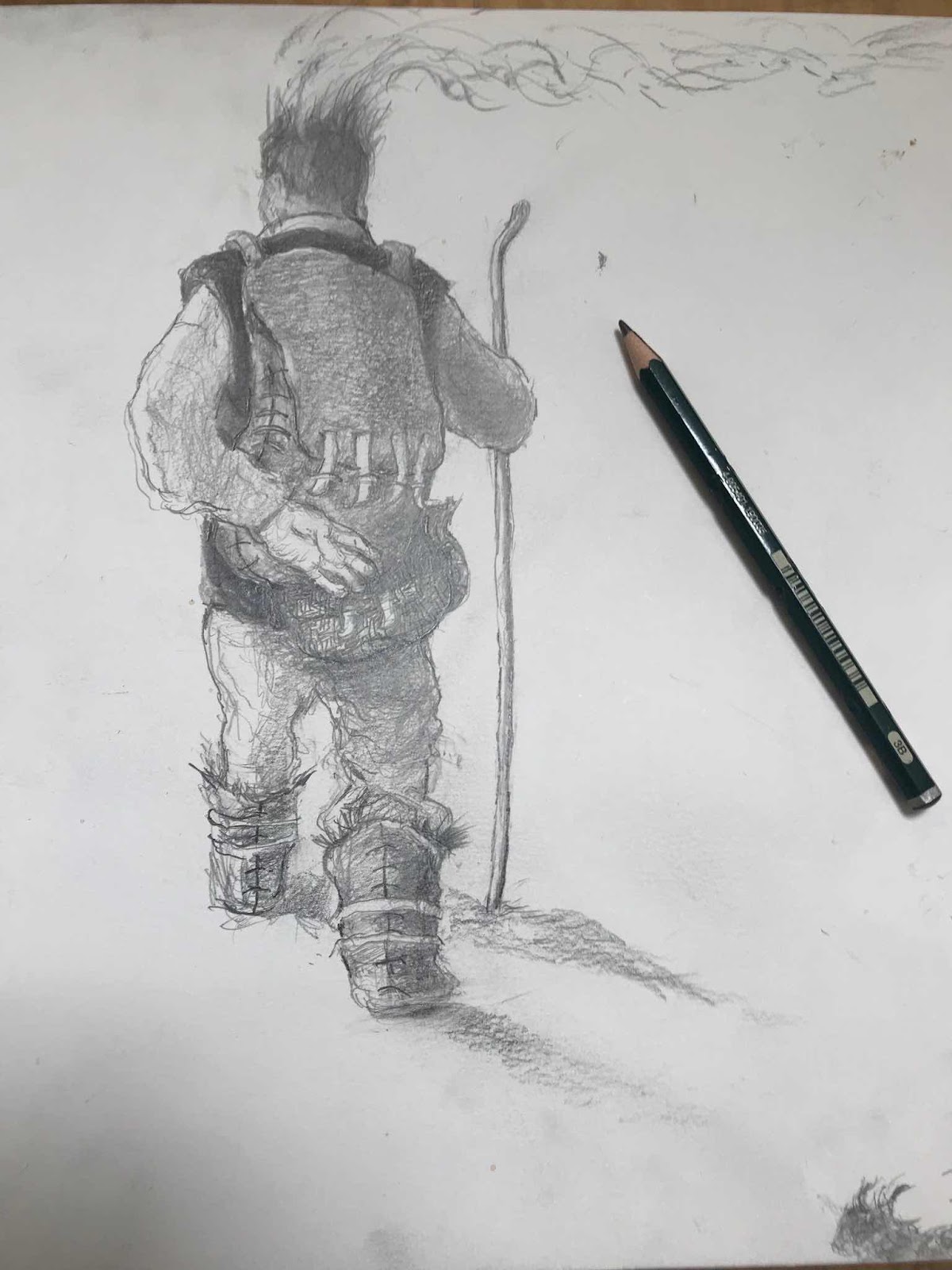 For those able to pick them up (chortling with self-congratulatory mirth) a few literary allusions even fly as thin as driving rain through this Writer’s Tale: ‘Faster than fairies, faster than witches’ and ‘Exit, rescued by a bear’ to quote but a couple.
Craftily careless
I have written in reviews of her earlier books how the child-pleasing, apparent carelessness of her illustrations bely considerable artistic skill in conveying character, emotion and movement. Such depictions are also, from time to time, supplemented by drawing that moves into somewhat more representational territory and conveys a different type of empathy. In fact, I suspect that Cressida Cowell harbours a great fondness for animals , because it is in depicting wild creatures that she often brings out her most sensitive style. One of the more effective (and effecting)  combinations of these diverse approaches is to be seen in the illustration of Wish riding the great bear, during her escape through the forest fire.
Lucky again, again?
The original characters and scenarios for the Wizards of Once, were inspired, imaginative variants on conventional fantasy protagonists, zany yet hugely engaging. However, even sparkling creations can begin to get tired and their adventures repetitive when an author starts to extend original concepts into an ongoing series.  Not so here. Cressida Cowell keeps her young heroes and their fantastic world vividly alive, and most certainly kicking too. Long may they remain so. Children’s reading will be invaluably the richer.
This story will stimulate the imagination gloriously, as well as exposing children to rich language, wrought into skilful  prose. It will subtly but powerfully make children think about our own world and some of its most pertinent issues, not least those of the importance of inclusion and tolerance, the acceptance of those who are different, and the worth of all individuals, regardless of, well, regardless of anything.
‘“My sister isn’t as prejudiced as everyone else,” said Caliburn. “There are kind people in the world. You just have to find them.”’ (p 19)
It is warmly human. It will help sensitise children to both the natural world, and to our heritage of story and literature. And it will do all of this in the context of highly amusing, joyful, exciting, engrossing entertainment. The many who will read it will indeed be third time lucky.
And the luckiest thing of all? The story of The Wizards of Once is not quite finished yet. Part Three ends with a wish.  Could one wish more?