Letters from the Lighthouse by Emma Carroll

I am allowing myself one of my occasional deviations from my 'magic fiction' theme as this book is too good and too I mportant to miss. 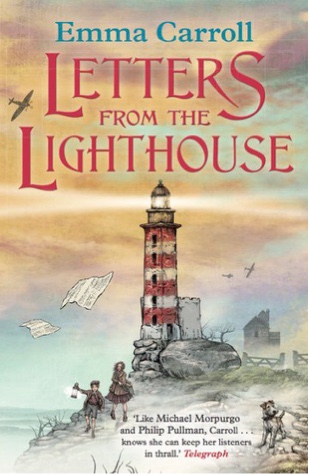 Children in a world at war

There is a wonderful tradition of children's stories set in WWII that spreads across the English-speaking world. Amongst the many classics are Lois Lowry's  Number the Stars, Judith Kerr's When Hiltler Stole Pink Rabbit, Anne Holm's I Am David,  Morris Gleitzman's Once, Bette Greene's Summer of my German Soldier and, more recently, Shirley Hughes' Hero on a Bicycle and Whistling in the Dark. Amongst these are some deeply moving stories as well as some profoundly disturbing ones. Most do not shy from the terrible realities of that war, simply to accommodate their young audience - and nor should they. They are some of the finest and most important children's novels ever, and some of them have equally important sequels.  They desperately need to be read by today's children, although some may well need adult support and mediation to cope with their terrors.

There is an equally important subset of such works which treat of children on the UK home front, many of them evacuees. These include Noel Stretfield's When the Siren Wailed, Nina Bawden's Carrie's War, Michelle Magorigan's incomparable Goodnight Mister Tom, and several books by the rather sadly neglected Robert Westall, Blitzcat, The Machine Gunners and the unspeakably touching The Kingdom by the Sea. They are challenging books because of their content, and some reflect the style of the time in which they were written as well as the period they portray. But all remain eminently readable.  They are truly great books.

And now a new novel joins this eminent company, and more than lives up to its predecessors. Emma Carroll has recently established herself as a significant writer for children. Her several children's/YA books are set in a variety of historical periods, each with quite different themes. characters and even styles. but they are consistent in their remarkable quality of imagination and writing skill. Letters from the Lighthouse, her first WWII novel, is written in a superficially simple style, although it is one where art definitely conceals art. Her book is therefore very accessible. Emma Carroll quite wonderfully captures the voice of the young girl of who is her protagonist. Olive knows much of what is going on around her, but there is also much that she doesn't fully understand. However, she is a sensitive, thoughtful girl and her growing awareness as the story progresses gives it considerable power and potency.

An air raid, evacuation and a mystery

The book opens with a vivid depiction of a London air raid and Olive's honest, but understandably bewildered, responses make it all the more compelling - and disturbing. Subsequently she is evacuated with her younger brother to a small town on the Devon coast. Whilst this is on one level an evacuee story, it is further enriched and enliven by an associated mystery, concerning the disappearance of her older sister, a coded note, and the titular letters to the lighthouse. There is more going on in the both her family and the seaside town than Olive initially understands. Moreover the two are connected and she is determined to discover exactly what those connections are. There is a rich cast of characters in Emma Carroll's tale and many evocative descriptions. It is a story that lives on the page and consequently in the reader's mind, and memory. The lighthouse itself, for example, is a quite magical place in which it is hard to imagine any child not wanting to live, or at least stay. Much happens in Budmouth Point that is brave, even heroic. However, the author is not afraid of portraying the less attractive side of human nature too and there are also ignorance and prejudice to be dealt with in Olive's new life.

As the book develops, many more of the terrible events of the times come to light, not least the treatment of Jews in Germany and their subsequent need to escape. It celebrates the brave deeds of some in this country who risked much to help them, but equally documents the very shameful treatment that some such refugees suffered at the hands of the British authorities. Through Olive, Emma Carroll bravely explores much that is difficult and terrible about war, she also balances it with much kindness, understanding and humanity.

This is an honest and sensitive introduction for young people to The UK home front and what happened to the Jewish race under the Nazis.  It is moving, but also shocking. It could not be anything else. Hopefully it will inspire some children to explore this dark history further further, by reading some of the books mentioned earlier. There are even more deeply moving explorations to be found in books like Once, or When Hitler Stole Pink Rabbit.

Despite its underlying darkness, though, this very special book is, at heart, about the enormous benefits of  communities, races and religions coming together, working cooperatively, and  accepting each other as fellow human beings. In this, of course, it is as much of a story about today as it is about the 1940s. Or perhaps we wish it were.

Although I was born just after the end of WWII, I was always aware that both my parents and my grandparents lived through it, and knew of many others who didn't. Earlier in life I was privileged to meet some who had been refugees or Holocaust survivors, combatants, POWs and evacuees. I have therefore always felt very close to the war and joined easily in the mantra 'We will remember them.' Today's children are further removed from those people and events, but it is just as important, perhaps even more important, that they remember too. Books like this will help them begin to know not simply what happened, which is only part of rememberance, but how lives were affected, how people were made to feel. They need to understand that, not all that long ago, children in many ways very like themselves were forced to live very different lives. We hope our children never have to experience the like in reality. However, they can experience it vicariously, through empathy with the characters in stories, especially ones so well written and engaging as this.