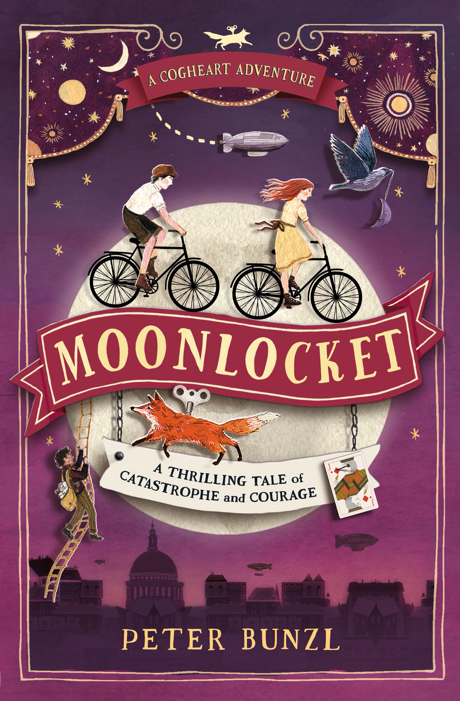 A most welcome trio
I have recently found three new  writers who are reinventing what might be called the children's 'adventure story' for a new generation, each one in a different but very special way. At a time when children's bestsellers are so dominated by comedy, they are to be welcomed most warmly. Of course, to be be  entertained by often rather farcical and scatalogical humour is a characteristic of childhood. All credit to the books which meet this need. Nevertheless children also need the opportunity to become totally immersed in engaging and exciting story and these three emerging fiction sequences provide that wonderfully. I posted here in June '17 about two of them, Abi Elphinstone's Dreamsnatcher trilogy and Jennifer Bell's The Uncommoners. Here is the third.
Victorian clockwork
Peter Bunzel's deservedly popular debut Cogheart, has now been followed by an equally entertaining sequel Moonlocket. Both are set in a fantasy version of Victorian England, involving some aspects of classic 'steampunk' but with the delightful addition of clockwork as what might punningly be termed a key energy source. This world is populated not only by humans but by wind-up androids, 'mechanicals', and indeed by 'mechanimals' too. Malkin, the 'pet' fox of protagonist Lily and her adopted brother Robert, is indeed one such - and a delightful and entertaining addition to their small band he is too. The storylines of both books involve high adventure of an intentionally melodramatic kind, peopled with dastardly villains, fiendish plots, hidden secrets, enigmatic clues, and high adrenaline chases and confrontations. They are classic derring-do, reminiscent of the cliff-hangers of the past. However, they are emphatically children's books too and, although the action is tense and thrilling, it is never graphically violent or disturbing.
Robert's story
Whilst the first book is essentially Lily's story, this second features Robert far more prominently. It centres on his need to find his true mother, following the tragic death of his much loved father. However, alongside this, Lily still needs to prove her worth to her own father, and to herself too. In fact the humanity of its main child characters adds much to the high adventure of its storylines The emotional journeys they experience, alongside their villain chasing, are engaging and often very moving. The books manage a good deal of humour too. Peter Bunzl throws in many a pun and witticism along the way and his stories are all the more entertaining for it. For example, in this second book, the real name of the villainous thief, known as Jack of Diamonds, is Jack Door. At one point Robert teases the clockwork fox with, 'Malkin, you're so easily wound up.' You get the feel I'm sure. Children will love it.
Escape into adventure
In terms of their offering vicarious adventure, these books could be described as Enid Blyton for contemporary children. Ms Blyton may not have been a great literary stylist, nor was her imagination particularly fecund, but she did understand supremely well what it was that the children of her day wanted and needed in their reading. In all her most iconic series, The Famous Five, The Secret Seven,and the Adventure  books themselves (Valley of . . ., Circus of . . ., etc.), she created likeable characters with whom readers could readily identify and gave them exciting adventures, the like of which her audience were highly unlikely to experience themselves.  Her books allowed children to escape temporarily from their everyday lives and to forget  themselves in story. They provided dangerous thrills within the safe comfort of familiarity, securely bound within the covers of a book. For some they also allowed children to discover 'friends' of a quality and intimacy they did not otherwise have. Her books were less about children finding themselves as about children losing themselves. They were essentially escapist. But, within reasonable bounds, that is no bad thing at all.
Not always the best years
It is romantic myth to think that all of childhood is idyllic; a myth created, I suspect, largely from the nostalgia of those who have long left their own childhood behind. Sadly, for far too many, much of childhood is traumatic, seriously affected by family conflict, breakdown or tragedy. For many others it is stressful. Bullying, school issues, social and peer pressures are amongst difficulties all to real. And even when blissfully free of these, whole periods of childhood can, frankly, be dull, humdrum, routine. It is enormously helpful for many children to loose themselves for a while in a diverting book. Of course it is also important for them to read stories in which they can learn about life, in which they can come to know themselves and others better. But they need to be able to escape from their everyday reality for a while too. And as long as it doesn't become obsessive, or delusional, then I believe it is a healthy and helpful survival strategy, an aid, not a hindrance, to growth and development. This is just as important now as it was in the days of Enid Blyton, perhaps more so. The advantage for today's children is that they can indulge in temporary respite from reality through far superior and imaginative fiction like these Cogheart Adventures.
Adventure plus
Books by Abi Elphinstone, Jennifer Bell and Peter Bunzl are most valuable editions to the contemporary children's canon. They offer the highest quality escapist adventure and a lot more besides. They also feed the imagination, engender empathy and understanding and immerse young readers in an enriching language experience 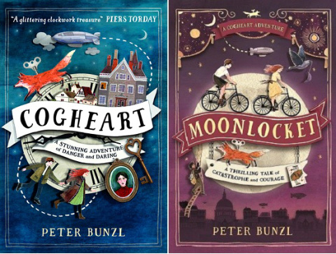