The Poet's Dog by Patricia MacLachlan 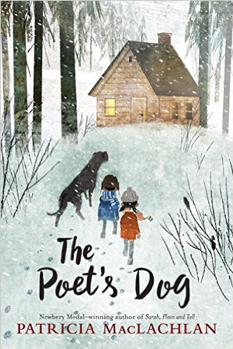 Here is a true little gem of a book, from a much-admired US author. Thanks are again due to Pushkin Children's for bringing it to the UK.
Poignant and accessible
There is already much excellent children's fiction around, dealing, as this does, with bereavement. However, this beautiful but short, simple novel is particularly accessible to younger children, those who have, perhaps passed the initial picture book stage, but are not ready for full-length fiction. It will have much appeal for many older readers too, though; it says a very great deal in comparatively few pages, and says it with poignancy and gentle honesty.
Apart from its length, one of the things that makes this title so accessible for young readers is the fact that the loss is experienced principally by a dog. It is a talking dog too (for those who can hear him) having been educated into language by his beloved poet owner. Because of the skill of Patricia MacLachlan's writing this is nowhere near as twee a concept as it might have been. In fact, the dog-centred narrative is handled quite beautifully, with past and present cleverly but clearly interspersed. Within its own terms, it is fully believable and its emotions authentic, apt and affecting.
Warm and consoling
Its other strong, and fully age-appropriate, feature is that it introduces themes of saving others, and of finding new companionship and love, right from the first pages. This continually balances the pain of loss, avoids too much potential harshness, and ensures that there is positive resolution, not just as a distant prospect, but as a present reality. This story both consoles and heals.
The language used is straightforward but highly communicative and there is much kindly humour, which adds to the book's charm and warm-heartedness. That it manages all this without excessive sentimementality is greatly to the author's credit. UK readers will probably find some of the  culture very American, but nothing that will intrude on reading pleasure, or diminish this tale's important messages. 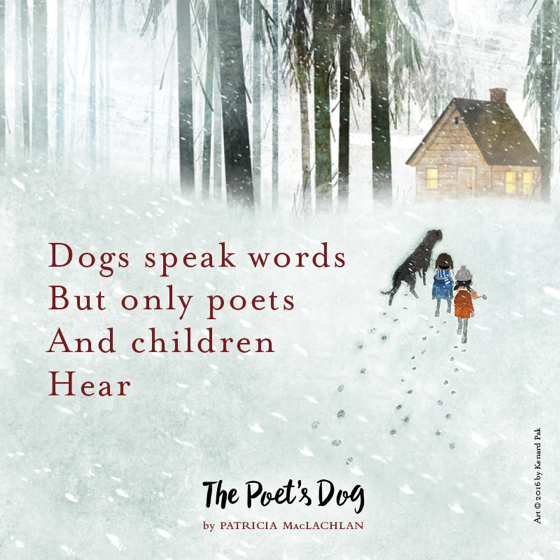 Celebrating language
I have a further major reason, though, for thinking so highly of this little book. Throughout, it quietly but effectively explores an additional theme, that of the importance of  language as found in wonderful poetry and prose. A key message is that we can gift a love of words by frequently reading aloud to children poems and stories that demonstrate the wonder and beauty of language. This enables them, like the dog in the story, to think, understand and communicate in quite magical ways. It is such an important gift, so easily given,  and therefore such an important message for parents, carers and teachers.
Reading to share
We have recently been given a superlative new vehicle with which to share the language of wonder and the wonder of language: Robert Macfarlane and Jackie Morris's gem of a new book, The Lost Words (see my post from October '17.)  There are, or course, libraries more of such riches, both poetry and prose. However The Poet's Dog itself also promotes some fine potential read-aloud titles, including some 'classic' American ones, which are probably little known over here, but are well worth seeking out.
Indeed, I would like to see far more UK children (and adults) discover another little treasure,  Morning Girl by Michael Dorris, one of the titles mentioned. It would give them real insight into a lost way of  life based on simple connection to nature, beautifully caught through the imagined experiences of two indigenous American children from over 500 years ago. Simple lessons are learned, as deep as oceans. A little more of what they understood then would benefit all of us as human beings today.
The short chapter where Morning Girl's brother, Star Boy, hides amongst the rocks is one of the most breathtakingly wonderful pieces of writing for children I know; and the one where he weathers the storm is not far behind. The ending is enough to make you weep with shame, and beautifully handled. 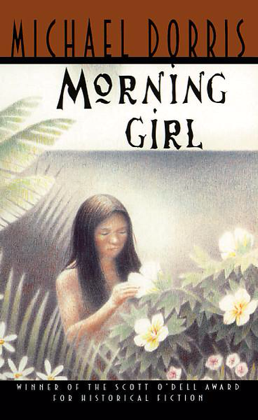