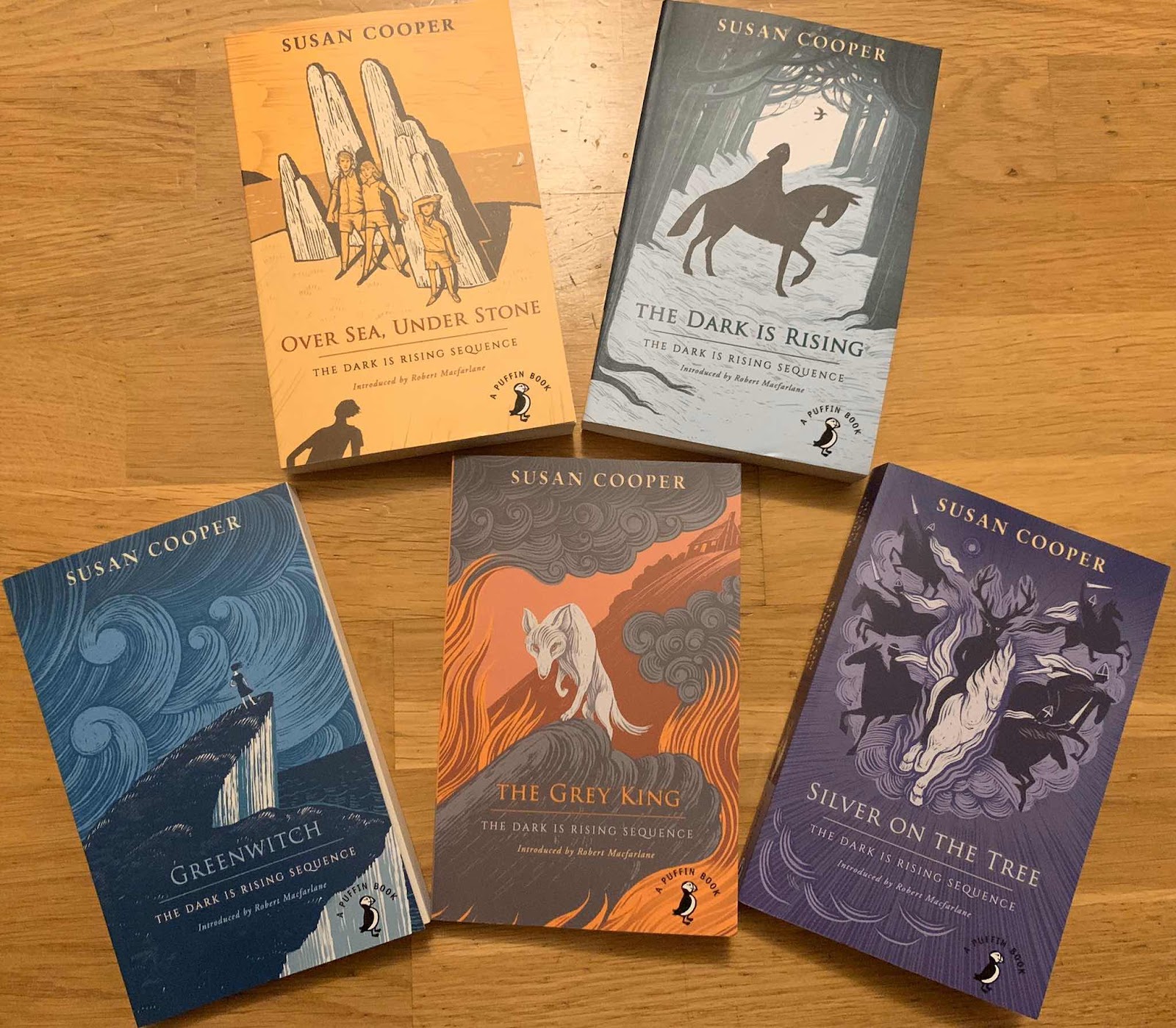 New cover illustrations by Joe McLaren
Stunning new editions
I am just thrilled to see these beautiful new editions of Susan Cooper’s deserved classic, the Dark is Rising sequence, released by Puffin. They should bring a whole new readership to these wonderful books - and our children’s reading experience (and very possibly their lives) will be hugely the richer as a result.
Prelude
The first of the set, Over Sea, Under Stone, was written well before the others, and its earlier genesis does show, although it is still an important development in children’s literature, and well worth reading. It provides a valuable prelude to what follows.
The dark days of Midwinter
Susan Cooper really hit her stride, however, with the book that now gives its title to the whole series,  The Dark is Rising. This is one of the very greatest works of children’s fantasy fiction, and a very fine piece of literature at any level. With its narrative spanning just a short period of days from Midwinter’s  Eve to Twelfth Night, it is perhaps the apotheosis of a child’s stand against the forces of the ‘Dark’. It also draws on the resonances of British landscape and folk myth more sensitively and yet more powerfully than almost any book I know.
. . . and beyond
The series subsequently develops into a quite devastatingly memorable fantasy sequence. Overall, it is truly a story for all time, which very much deserves a presence in our own.
New contributions from two other greats
There are also two very particular reasons for seeking out these new editions. Firstly, the sequence is introduced, at the start of each book, by Robert Macfarlane, a brilliant writer, who is fast becoming the Merlin/Gandalf (Merriman?) for our contemporary world. He conveys his love of, and admiration for, these books most tellingly, and his illuminating introduction is unmissable for any aficionado of children’s literature, as well as for more general readers. No less an attraction are Joe McLaren’s striking new cover illustrations which brilliantly capture the distinct character and energy of each book, whilst still subtly tying them together as a set. Both new additions bring these titles vibrantly into our own time, and a wonderful thing that is.
For now . . . and the future
The Dark is Rising sequence needs to be discovered by as many new young readers as possible, not to mention any older ones who have not yet read these stunning books. They are not one jot less accessible, powerfully thrilling or rewarding than when they first came out fifty or so years ago. I hope these reissues will also prompt revisits from many old friends too, for these are books which amply reward multiple re-readings.
Robert Macfarlane reminds us in his introduction that, ‘The dark is always rising, and the work of the greatest stories is to hold it back.’  Few books succeed better in this than these from Susan Cooper. Long, long may they continue to help hold back the dark.
Posted by Gordon Askew at 14:14