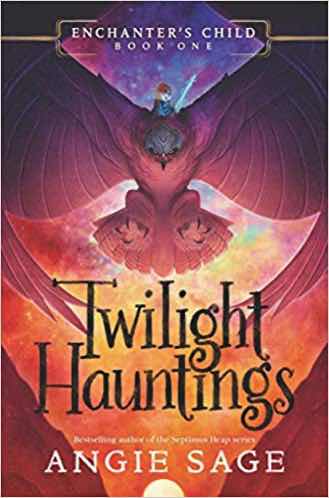 Septimus Heap . . . and then
Angie Sage’s Septimus Heap series (Magyc, Flyte, Physik, Queste, Syren, Darke, Fyre) is one of children’s literature’s finest long fantasy sequences. It may not be the same massive cult phenomenon that is Harry Potter, but then what is? It is every bit as engaging, building a rich and highly imaginative magical fantasy world over seven wonderful stories, each as captivating as the last and building into an overall epic tale, that, whilst huge, never looses its accessibility or appeal for young readers. It is filled with engaging characters and wonderfully grotesque villains and bursts alive with both highly entertaining humour and thrilling storylines. It manages to be spine-tinglingly scary with out ever being disturbingly macabre; dark fatasy with a light touch, if you will. Septimus himself is one of the most endearing, if humanly fallible, of fantasy protagonists, and the whole saga is spot on for a readership of around 8-12. It is a children’s fantasy writing triumph.. 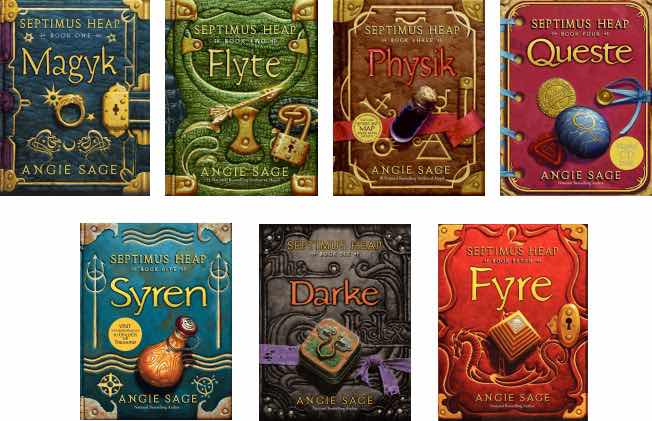 Todhunter Moon . . . but too little of her
When Angie Sage rounded off  Septimus Heap it in 2011, with a seventh and seemingly final title, Fyre, it left a huge whole in many children’s reading lives, as well as the hanging question: how do you follow that? However, she soon succeeded. By continuing the world of Septimus into a new new generation, with former characters as adults and a brilliant new cast of young characters, this time led by a girl, Todhunter Moon, she kept her wonderful creation alive, whilst invigorating with a totally fresh feel. It was the perfect solution, delighting her many fans that they could come back to her books, whilst completely banishing any feeling of staleness. This new series (Pathfinder, Sandrider, Starchaser) retains all the many qualities of the first, whilst adding layers of vibrant imagination, to her hugely entertaining magical enchantments.

(By the way, the American editions, enriched with sumptuous illustrations by Mark Zug, are ravishing books to boot.) 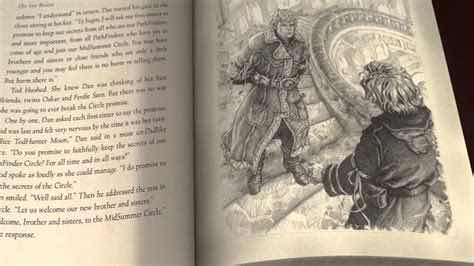 So what is very strange, almost incredible, is that the Todhunter Moon series, seems to have come to a halt, after just three books, when it gave every impression of having the potential for a sequence equalling the first in both length and quality. It is one of the biggest disappointments in recent children’s publishing.
Instead of more of these, the author went on to publish (in America) an interesting and enjoyable, but rather untypical, stand alone novel Maximilian Fly.
And now . . . Enchanter’s Child
However, now there is some very good news. It is doubly exciting that not only does Angie Sage have a new children’s fantasy novel out, Twilight Hauntings, but it is designated as Book 1 of  ‘Enchanter’s Child’, so there is definitely more to come.
Here the author  has created a totally new high fantasy world. Although it perhaps does not have quite as much of the wicked humour and delightful caricature of the Septimus Heap books (though it does have its moments),it is otherwise classic Angie Sage, replete with all her engaging plotting and richness of imagination. In a land where enchantment (and especially enchanters) are not only outlawed but actively hunted by an array of malevolent creatures, a former king’s enchanter is now in hiding and forced to flee from the very ‘hauntings’ he was responsible for creating. Finding an unlikely sidekick in a reluctant young magic-hunter, he sets out to seek the daughter he was forced to give away at the time of his persecution. Meanwhile, said daughter, unaware of her true father, or her own magical heritage, has to grapple with the consequences of a rather less than ideal foster family, Betrayed by a malicious step-sister, she escapes with the help of a young lemon-seller and his entertaining donkey. This new cast of principal characters and the world in which they live are vividly evoked, along with the wonderfully chilling variety of creatures sent to haunt and hunt them. Angie Sage remains a consummate storyteller and understands just how to hook young readers in and keep them enthralled and entertained. Hers is exactly that sort of page-turning story where every time you think things are getting better, they only get worse - until, of course, they don’t. Together with her earlier books (for any who don’t already know them) Enchanter’s Child is most warmly recommended. Those who like their reading to provide thrills aplenty, but in a somewhat lighter vein, for example any who have recently enjoyed Michelle Harrison’s delightful fantasies, should respond to it enthusiastically.
Available here
Although Twilight Hauntings has an American publisher, they are distributing it over here too, so it should be easily available. Be sure to seek it out (preferably from an independent bookshop). And we now have Book 2 to look forward to as well. However, we could still do with more of Todhunter Moon and the world of Septimus Heap. Young readers are missing out hugely, and children’s fantasy literature is most definitely the poorer for its lack.
Posted by Gordon Askew at 06:05