The Goat by Anne Fleming 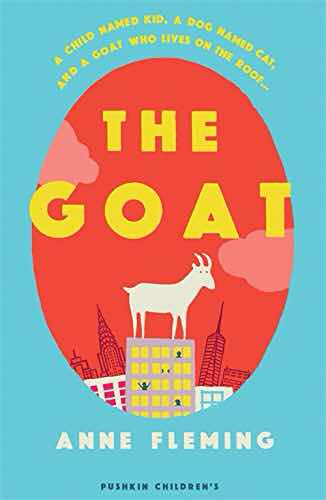 'Kid supposed that the beauty of the falcon was directly related to its ability to kill, a completely different kind of beauty than the beauty of the pigeon, and that humans' ability to recognise the two beauties and not to call one beautiful and the other ugly said a lot about humans.' (p 74)
Grown-up stuff for children
I love children's books to be original (providing of course they are good with it), to stand out from the same-old-same-olds that so often dominate the bookshop shelves. Yes, I know children like to read the familiar, and there is nothing wrong with that, but there is sometimes the need too for a breath of fresh air, particularly one that blows in like a deliciously cool blast in a heatwave.
I also love it when children's books don't patronise their young audience. Many children are far more sophisticated readers than we give them credit for - and bright too of course.
The Goat meets both these criteria quite magnificently. Canadian author Anne Fleming is a highly successful writer for adults but this is her first venture into children's fiction. However, unlike many, what she has done is not so much write a childish story as to make a work of pretty 'grown-up' fiction accessible to (and hugely enjoyable for) an audience of young people. And that makes it a very special book indeed.
True, her central character is a young girl, Kid, who has just moved to NYNY, and is almost pathologically shy. Even more pertinent, perhaps, another major young character, Will, has lost both parents in The Twin Towers, and suffers serious consequences, including an inability to look out of high (or indeed almost any) windows. Whilst these are important themes, given potent contemporary relevance here, they are indeed the stuff of children's fiction. In fact, North American literature for children has a particularly strong tradition of very moving books which feature children dealing with death and bereavement.* However the other lives that feature in Anne Fleming's short novel are something of a different matter. Prominent amongst these is a couple where the husband has suffered a stroke and his ever-loving wife feels she has 'lost' him. There is also a blind adult who meets the woman he thinks could be the love of his life but is then distraught when he cannot find her again. There is a city-loving gent whose who finds himself tasked with scattering his outdoorsy dad's ashes on a mountain trail. And then there are Kid's parents, a frustrated writer and a chronically insecure actress. All these you would perhaps expect to find in an adult book more than in a children's one. 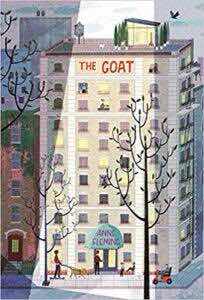 Grown-up writing for children
This rather adult approach to fiction is also carried through into the narrative structure of The Goat. Here there is little exciting, action-packed children's 'adventure', but rather a series of vignettes of the lives of several residents who share  a NY apartment block. Pen portraits, dialogues, flashbacks, and day-to-day incidents are skilfully interwoven to build insight into the complex thoughts, feelings and relationships of these diverse and fascinating characters This author shows the skills of a brilliant short story writer and can, in just a few pages, open revealing windows into the lives of each of her subjects. Nor does she shy away from the very real pains and problems of life itself. Much of the content here is, in essence, strong stuff, although handled with sensitivity and compassion. In fact Chapter 4, where the young man goes, initially rather reluctantly, into the mountains with his father's ashes, is as heartfelt and affecting a passage as in any adult fiction.
Leavened by humour
Yet what makes this story so accessible and enjoyable it its lightness of touch, and, more than anything, its pervasive and delightful humour. Without actually detracting from its potent and moving content, this is a very funny and entertaining book. From the naming of pets (a dog called Cat) to sharp one -liners, from slick, clever turns of phrase to witty dialogue, from drollery to farce, the book is a continual joy to read. And, because of this, a story that is touchingly sad in parts is never morose; though much is heart warming,  it is never sickly
'We are sunker than sunk,' moans Kid's mum at one of her lower ebbs, 'We're a wreck. We are on the ocean floor. Divers are swimming through us looking for relics.' (p 129)
It does indeed expose children to the realities of adult life, but it also shows them its joys.
'Joff realised he had a smile on his face. He'd been recalling different things Mara had said, and the way she said them. The way she said "buckaroo" most of all.' (p 32)
The central part played by Kid and Will gives children a point of identification with the story which is important.
But it is not simply about children's lives, nor yet simply about adult lives. It is simply about life - and I think many children will respond to that.
Getting the goat
And then, of course, there is the Goat of the title. And the baby mountain goat, putative resident of the apartment building roof, is the glue that holds the story together. It is the children's quest to ascertain whether it actually exists that provides the principal thrust of this intriguing, and completely engrossing story. It is the goat, too, which eventually draws the strands together into a heart-warming resolution- but not until after it has precipitated (ha ha!) what is possibly one of the most hilarious 'Keystone Kops' type chases that you will come across in print.
Despite its superficial levity, though, this is a book with much to say; one that will leave the reader with a lot to think about. It implicitly endorses a wonderful aesthetic, both metropolitan (with its museums, opera and theatre) and rural (with its mountains, its open vistas, and  its simple smell of grass).  It celebrates the healing power of friendship. It is, very movingly, about loss. But most of all it says that life is wonderful and goes on despite its many setbacks and tragedies. Children, like Will, can and should look out of the window, literally and metaphorically.
This book is only short (even I, who emphatically belong in the slow readers' group, devoured it in a couple of hours) but it is long on human resonance In the final analysis, there's only one word for it: it is, as the lady says,  'buckaroo!'

Afterword: Pushkin Press
I am becoming ever more impressed with books from the list of Pushkin Children's. Their stated mission is to 'share tales from different languages and cultures with younger readers', and they are succeeding wonderfully in this. Amongst other treasures they have published is one of my 2017 Books of the Year, The Murderer's Ape by Jakob Wegelius. The Wildwitch series by Alene Kaaberøl is a brilliant 'entry level' fantasy, and they have been bold enough to publish Cornelia Funke's disquieting but brilliant Reckless series for slightly older readers. They have also recently republished From the Mixed-Up Files of Mrs Basil E Frankweiler by American writer E L Konigsburg, a true classic of children's literature, but one that could otherwise easily have been overlooked this side of the pond. And now there is this more recent gem.  Pushkin seems to have a remarkably good nose for quality children's literature. Many of these books represent a 'road less travelled by' for young UK readers. But Pushkin Children's are now providing a wonderful opportunity to explore that road. For those who do, it it will make 'all the difference'.
Footnote:
*Including: Katherine Paterson's Bridge to Terabithia; Doris Buchanan Smith's A Taste of Blackberries; Jean Little's Mama's Going to Buy You a Mockingbird. Important and wonderful books all.
Posted by Gordon Askew at 10:48